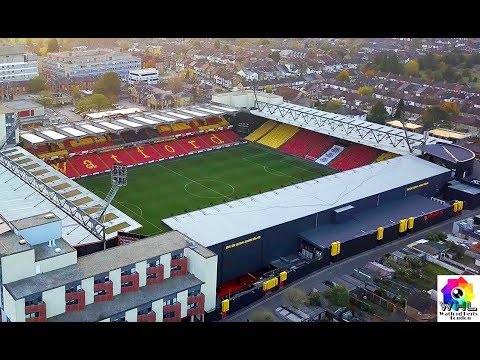 This stadium has been the home of Watford since 1922, when the club moved from Cassio Road. The ground was officially opened by Col. Charles Healey of Benskins Brewery. In addition to being Watford’s home since opening, the stadium was also home to Wealdstone F.C. between 1991 and 1993, and to rugby union side Saracens from 1997 until they moved to their new home at Allianz Park in February 2013. After purchasing the freehold of the stadium from Benskins in January 2002, Watford’s financial situation forced them to sell and lease back the stadium later that year. However, after a campaign entitled ‘Let’s Buy Back The Vic’ with donations coming from fans, as well as celebrity former owner Elton John donating the entire proceeds of a concert held at the venue, the club was able to repurchase the stadium in September 2004.