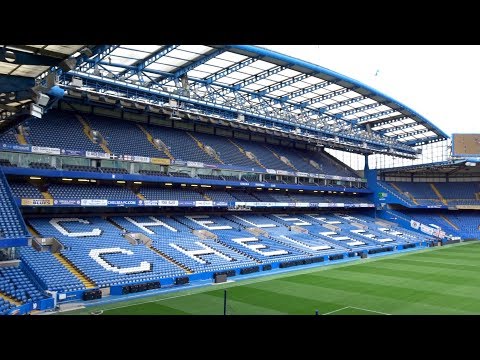 The ground was opened in 1877, but for first decades only athletics were played here. It was in 1905 that Chelsea was founded by owners of the venue at that time after Fulham refused to move in. In its initial form the ground had room for some 100,000 people, but only 5,000 under a covered stand designed by renowned Archibald Leitch. Remaining 95,000 has to use uncovered terracing surrounding the athletics track. Interestingly, the main stand was a copy of identical structure erected at nearby Craven Cottage not long before.

Further decades brought several changes with one almost leading the club to fold. A new east stand, first one to be built close to the pitch (without athletics track), was opened in 1973. It was supposed to be first of four new ends, but costs grew so much in the course of work that Chelsea lost ownership of part of the freehold. Part of the stadium was then bought by property developers Marler Estates. Only after the company went bankrupt in early 1990’s did the ground become Chelsea’s property. Or actually property of Chelsea supporters as they were major shareholders in Chelsea Pitch Owners, a trust established to assure stable future for the stadium.

It would be quite a challenge to count all events that took place here. Starting from athletics and little known shinty back in 19th Century, through greyhound races, cricket, baseball, American football and last, but most important, obviously – football. Three FA Cup finals were played here (1920-1922), national team also gave 5 appearances (last one in 1946) and Chelsea gives the ground day-to-day use with average attendances not falling below 41,000 even once since the 2003/04 season, meaning sell-out crowds at nearly all home fixtures.