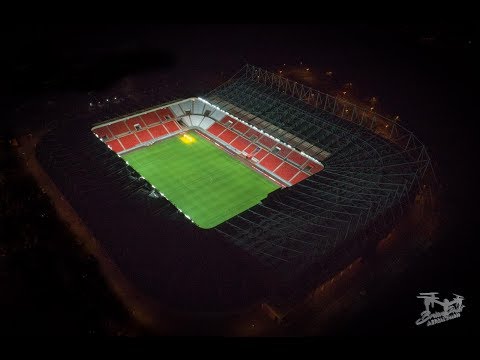 After Taylor Report had been published in 1990, Sunderland started to look for alternative stadium site. Their Roker Park was unfeasible for redevelopment along new requirements and not suitable for expansion. In 1992 chance to build a new venue next to Nissan car plant appeared, but was blocked by the manufacturer. Finally in 1995 plans were announced for a stadium on the site of former coal mine, very close to Roker Park. Initially it was planned to have 34,000 seats, but was later changed to 40,000 and before opening in 1997 to 42,000. Despite these alterations works were done on schedule. Even more the price sounds very low, at just £16m. Further £7m was spent by the club in 2002 to expand the ground to just below 49,000. The name pays tribute to miners of whom many are still part of Sunderland’s fanbase. The light is symbolized by “Davy’s lamp”, a traditional element of mining equipment. Monument of the lamp is located next to the stadium. Since 1997 Stadium of Light is constantly used by Sunderland, but has also played host to two national team games and numerous concerts in the summer season.