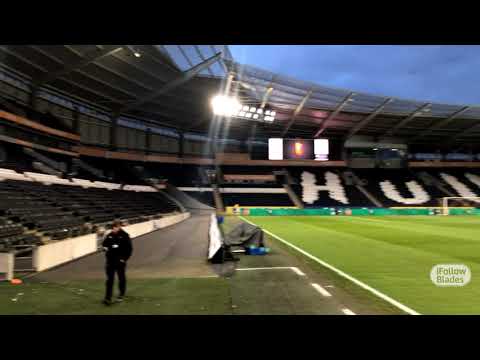 The idea to build a new stadium came about in 1997, when existing Boothferry Park was fund well below stricter standards of ‘post-Taylor’ reform. However, insufficient funding initially blocked the development. Thorough analysis of several plots in the city and outside Hull ended with West Park being selected. The place is both near city centre and in a fair distance from homes, not deteriorating residents’ comfort on matchdays.

Planning and design were done by Arup Sport and Miller Partnership – both companies renowned for their other English stadium work. Single-tiered bowl (topped by a second tier only on the west side) were to accommodate between 25 and 30,000 people. Though capacity was finally left at 25,000, possibility to expand by adding another tier to the east still remains. 28 skyboxes are included in capacity, all located between tiers of the main stand. Stadium is owned by the municipality as it provided £42 out of £44 million. This was possible when Hull sold their shares in Kingston Communications, stadium name sponsor. Despite some difficulties along the way, construction ended within expected budget and schedule (14 months).

Both football and rugby sides provide week-to-week use for the ground nowadays, though City are said to be analyzing a possible move due to inability to buy the stadium from the municipality. National teams in both disciplines also play some fixtures here, though the stadium isn’t of major importance nationwide. Summer concerts bring stars every year, with the likes of Elton John, Bon Jovi or R.E.M. playing.