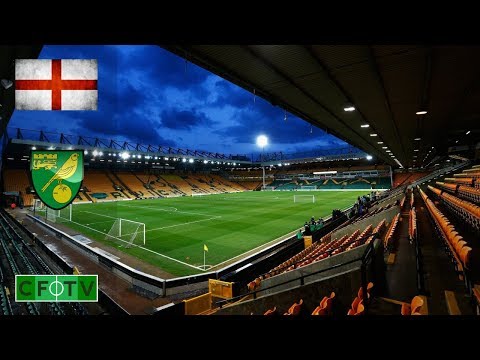 Norwich City started looking for a new ground in 1926, when their previous ground was already too small. Its standard wasn’t the highest as well, biggest proof of which was collapse of parts of the pitch by up to 9 meters into the ground due to chalk shift collapse underneath. Attempts to level the field failed, FA refused to accept the ground any more. “The Canaries” were then forced to find a new ground fast. They bought a plot encircled by Carrow Road from three sides and have been there ever since. Building the new stadium had to be extremely fast and was indeed – tenders took no more than 11 days and the whole construction process of stands accommodating around 38,000 people was just 82 days! No wonder the club called their new ground as ‘the 8th wonder of the world’. Soon after opening an extraordinary guest appeared in the crowd. In 1938 king George VI watched Norwich fight Millwall as the first monarch to ever attend a 2nd league encounter. In 1956 floodlight masts were raised, nearly running the club bankrupt. But sporting success grought money and in the next 5 years three stands were covered, leaving only one without roof. Then came years of raising the standards. First after the Ibrox Tragedy of 1971, then after fire consumed one stand of Carrow Road in 1984 and finally after Hillsborough, which forced the shitft towards all-seating stadia. Along with redevelopments one corner was then filled with a hotel.