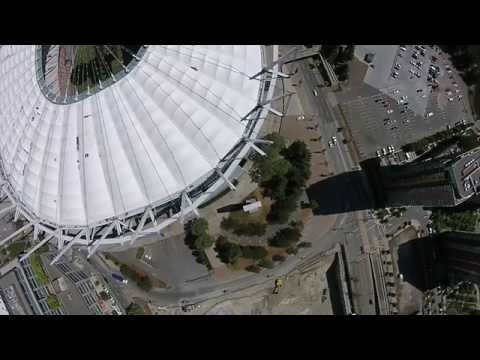 The ground was built in 1981-83. First major international event came no sooner than a year after that, however, when pope John Paul II visited the packed-beyond-capacity venue. Then major ceremonies of 1986 Expo were also held here, just like numerous concerts and finally opening and closing ceremonies of 2010 Winter Olympics and Paralympics.

After the latter event came the largest refurbishment of the ground during which the roof was replaced. Before 2010 it was the largest air-supported dome in the world. Afterwards it lost the title, but gained new ones. It’s the first retractable roof in North America supported on steel ropes, similar to these in several European stadia. The roof is bigger than in the European counterparts and so are giant screens hanging over the centre of the pitch. However, the most characteristic part are probably curtains that may be set between first and second tiers of seating for any event. They allow for the impression of a full ground even for events that gather only 21,000 spectators.