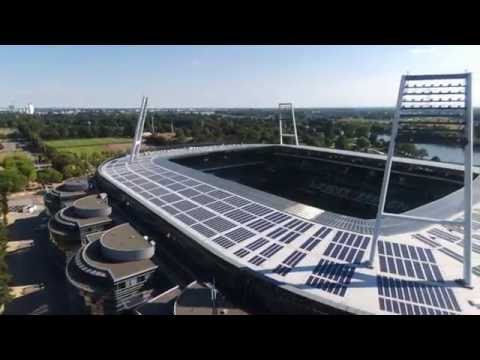 The name Weserstadion became common due to proximity of Weser river. Around the same time Werder Bremen and less known Bremer SV started using the venue, with first one becoming permanent tenants and the latter moving out in 1963. In 1992 it became Germany’s first ground to have skyboxes, receiving further commercial and office space in 1997’s redevelopment of the East stand. Capacity went up again in 2002 when athletics track was dismantled, pitch lowered and temporary seating placed in the gap, bringing fans closer to the action. A further change to 50,000 was planned for 2008, but ambitious plans had to be reduced. And so a complex revamp was carried out in 2009-2011, but capacity stayed almost unchanged. The stadium did change a lot, though. Two end stands were rebuilt, this time making Weserstadion a proper rectangular football ground without curves. Completely new roof and outer shell came along, both loaded with photovoltaic panels that allow the stadium to supply its own energy.