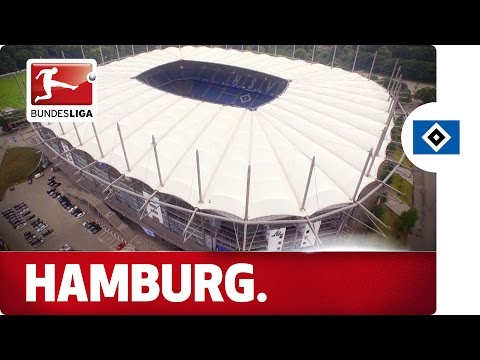 Construction cost was at around €97 mln. The venue designed by Mos Architekten and SBP engineers has two tiers of seating and standing (though terraces are placed only on the lower tier for home fanatics and away fans) that can take up to 57,000 people. Matchday attendance is close to that number, setting HSV among Europe’s top clubs in terms of active fanbase. That’s especially good news for the club that previously only leased the ground, but since the redevelopment is the actual owner. Light membrane roof covers all spectators while pylons supporting roof are also used as exposition space for naming rights holders that change rather frequently.

The opening game of the historical ground was a Germany-Greece international. However, there’s a lot more memorable moments that happened here. In 1974 the “German derby” of West and East Germany was set here with the home side losing 0:1. Then there was Euro ’88 and after rebuilding the ground also 2006 World Cup and 2010 Europa League final.