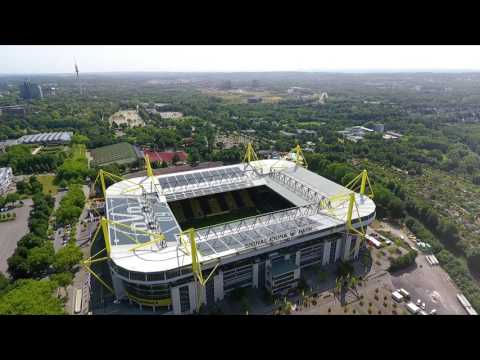 Already in the 1960’s there were plans to build a new ground in Dortmund. The municipality couldn’t afford that, though, and regional authorities weren’t willing to subside. Then the unexpected happened when Cologne lost their spot in 1974 World Cup host-city list and Dortmund jumped in. Along with hosting the tournament, money for a new ground came.

So the club, being the first one in German history, decided to finance expansion works that would bring the venue to its former number of spectators. 54,000 people could again watch BVB thanks to second tier over two stands alongside the pitch in 1995. Two years later the numbers went up one more time, now thanks to adding second tier to the north end and extending the southern stand with standing room. Since then it has been the largest standing terrace in Europe with a total of 24,454 people accommodated behind one goal only. Now renowned for great atmosphere, Sudtribune is still the biggest of its kind.

Last redevelopment so far came before Westfalenstadion’s 2nd World Cup, the one in 2006. To fulfill FIFA’s requirements corners that had been empty from 1974 were filled with seating. Building new sections was not a problem, but roof of all other stands was in the way – literally. Large supports of the roof were placed in the corners and had to be removed not to block sightlines of fans in new corners. 8 massive pylons were thus raised on the outside of the roof, bearing the weight and allowing for inner supports to be removed. For its great sightlines, steep stands and unique atmosphere this stadium is often named among best football grounds in the world.