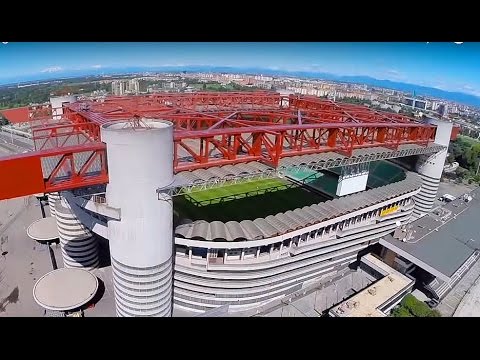 Although today the monumental construction is very impressive, San Siro wasn’t always huge. In 1926 it had a capacity of app. 10,000 people. That changed in 1939, when redevelopment increased it to 55,000. In mid-fifties it became one of few stadiums in Europe to host up to 100,000 spectators and at the same time a sell-out crowd at Italy-Brazil game has set the crowd record. In 1989 capacity went down to 85 000, because despite the stands were enlarged, seats were also installed. The 1989 redevelopment was also the last major one, done due to World Cup in 1990. 11 spiral staircases were mounted, four of which became support for the roof at the same time. Stadium is covered thanks to huge red thrusses overhanging the seats. In its history San Siro was the setting of many great games – starting with the derby of Milano and ending with prestigious internationals of Italy, Champions League final and World Cup. Its fame seems everlasting as in recent decades it’s continuously among 10 European venues with largest club attendances. Although neither AC Milan, nor Inter pack the ground to capacity on regular basis, they both draw most fans in Italy.