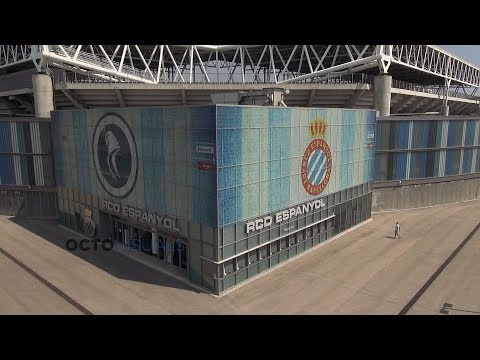 The stadium, built as a private investment of RCD Espanyol, lies app. 7km South-West from their previous home, the Olympic Stadium. Location in close proximity to major highway hub allows for good communication despite significant distance from the centre of Barcelona.

In 2002 the club acquired land for the venue, having paid some 360,000 €. Construction started in 2003 according to design by Reid Fenwick Asociados and took a long period of 6 years. Officially opened on June 5th, the ground hosted its first game in August and league fixtures since September 2009. The investment was planned with a budget of €60m, but turned out to be more expensive, reaching €75m.

Thanks to its ecological solutions (low energy and water consumption, production of solar energy) it received the prestigious Stadium Business Award in 2010 for best new ground opened globally. Various uses for stadium infrastructure were also given credit with a rare feature of hosting a cemetery for supporters in one of the corners.