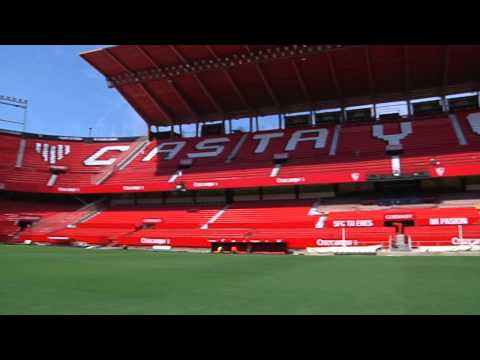 The most centrally located stadium in Seville bears the name of long-ruling president R. S. Pizjuan, who began efforts to build the stadium back in 1937, when he acquired the land. Later he was aiding the development of the project, not living to see the groundbreaking in December 1856.

Though opened in September 1958, the stadium wasn’t entirely done until 1974, when it reached the capacity of 77,000 people. This number didn’t last long, however, as 1982 World Cup brought the size down to just over 70,000. At that time the beautiful mosaic on the stadium’s façade was also created. Another size decrease came among several changes in 1990s, when all standing sections were replaced by seating, while the stadium’s facilities and technological systems were improved.

Since then capacity has been around 45,000. In 2015 Sevilla announced the biggest upgrade to date, including complete seat replacement, change of the stadium’s facades and interior infrastructure. Though primarily a club stadium, owned by Sevilla FC from the start, it also hosted many international events, like the mentioned 1982 World Cup or 1986 European Cup.