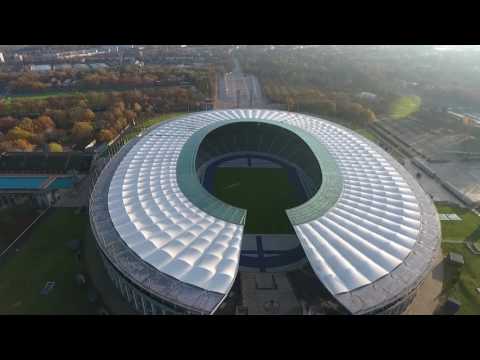 Initially this was to be the host venue of 1916 Olympics, but due to World War I the event was canceled. A complete revamp of the old existing ground resulted in a new venue in the 1930’s, when Berlin was preparing for its – this time successful – Olympic tournament. It wasn’t called Olympiastadion back then, the name was Reichssportfeld. Large stands divided into two tiers accommodated up to 110,000 spectators and were meant to symbolize the magnitude of Third Reich together with surrounding infrastructure, including the giant Mayfield and 77-meter high Bell Tower.

Since 1963 the football club Hertha use the ground and in 1974 it was again in global spotlight when 3 games of the World Cup were played there. As it turned out later, not the last tournament of this kind. Today’s shape of the ground is the result of 2004 redevelopment prior to World Cup 2006. German architects of GMP Architekten redesigned the seating bowl’s lower tier which was dismantled and built again steeper for better sightlines. Also, roof was provided for all fans. To save the historical facades no external cantilevers were installed, forcing architects to erect supports obstructing view to some fans inside the ground. The revamp cost €242m. Currently Olympiastadion is Germany’s largest all-seating stadium and second when counting standing rooms.