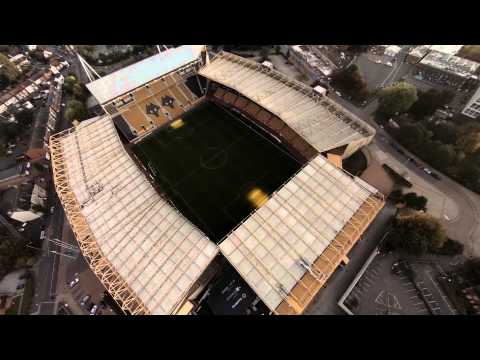 Although not among the biggest in England today, Molineux Stadium has a rich history reaching… the 18th century. It was then, in 1744, that the Molineux family bought the plot of land on which they’ve built Molineux House, later changed into Molineux Hotel. In 1860 another owner came in and made the place a leisure centre, retaining traditional Molineux name, but making it Molineux Grounds. Finally in 1889 local brewery bought the land and leased it to Wolverhampton Wanderers for their permanent stadium. Yet again, Molineux family name prevailed, this time joined by ‘Stadium’.

“Wolves” were bought by a new owner in 1990 and soon afterwards came the largest revamp so far. Starting in October 1991, one stand after another all four were replaced by December 1993. They remained nearly unchanged for two decades. In 2011 the Stan Cullis Stand was torn down to be replaced by a new structure, this time with 2 tiers of seating. Similar moves are to happen to two other parts of the ground and possibly to the main one as well. This is dependant from demand, though, as capacity would rise to 50,000 seats with this move.