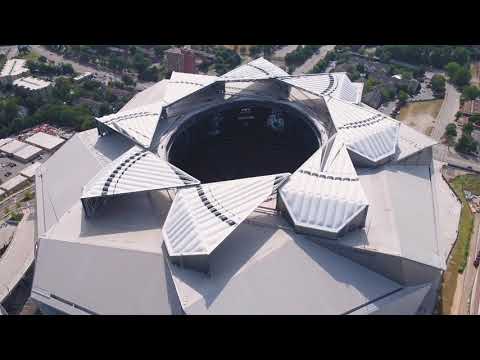 The most iconic part isn’t where fans will sit though, it’s what will hang above their heads. The stadium’s octagonal roof is an immense structure weighing 27,500 tons! Of that mass “only” 3,500 tons will be constituted by the ETFE-covered roof petals, designed to open and close within 12 minutes.

Just under the roof another signature feature of the stadium is located: the stadium world’s largest ever LED screen, with total surface of 5,793 m2 (62,350 square feet) and 37 million LEDs used. The panoramic ribbon is actually 6-floor tall in order for fans in all areas of the stadium to get a clear, unobstructed view.

The octagonal stadium was also designed in order to become NFL’s most sustainable venue, with LEED platinum certification in mind from the start. While not a solar power plant itself, the stadium has 4,000 panels in its vicinity, while its immense rainwater collection canister can become helpful not only for reuse of water but also in preventing local flooding.

Eventually the stadium’s construction took months more than planned and ended right before the 2017 NFL season. It took exactly 1,200 days between groundbreaking and the opening game. The cost grew far more, though. Initial estimates from 2011 suggested $700 million, later amended to $950 million before construction even began. In the end the budget rose to stunning $1.6 billion, which makes it one of the most expensive stadia in history.