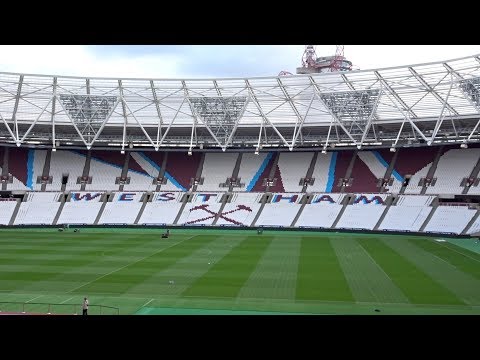 Design by renown architects of Populous was presented in Nov 2007, long ahead of 2012 Olympics, for which the venue was the centre point. Along with legacy plans accepted by the IOC it was to have capacity of 80,000 during Games and 25,000 afterwards, with athletics track left intact. Upper tiers of seating were to be recycled.

Regular construction works started in May 2008, but preparatory works date back to mid-2007. Along with progress of the huge project in Stratford numerous controversies were raised for aesthetic, financial and political reasons. Main structure was ready in 2011, but opening of the venue was delayed until May 2012.

During construction legacy plans were changed with football use being the preferred future and West Ham United the preferred tenant. Despite numerous protests, the selection was sustained and in 2014 reconfiguration began to make the stadium as suitable for football as possible.

This includes installation of the world’s largest cantilever roof, retractable lower tiers and permanent sanitary/commercial infrastructure around the stands. All of these efforts were chosen to allow maximizing revenue for Premier League fixtures and also host athletics events in the summer.