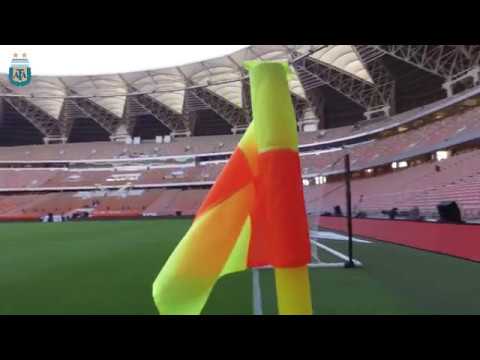 Initial plans envisaged a main stadium for 100,000 people and numerous other buildings spread over 900 hectares. In 2011 the plan was severely downscaled. The surface was reduced to 300 hectares, stadium capacity to 60,000, while secondary amenities limited to an athletic stadium, 2,000-capacity indoor arena, training pitches and a mosque.

The entire complex was rethought to be fitted into a large circle with the main stadium at its heart. Location between Jeddah’s two major highways makes road access the most preferred one and demand is to be properly addressed by over 25,000 parking spaces spreading radially around the stadium.

The stadium itself hasn’t been built along the traditional north-south axis. Instead, it was rotated by some 45 degrees west to best address local climate: provide shade and improve natural ventilation from the nearby Red Sea. Symbolically the stadium put at the heart of a large circle should be exposed like a gem. By day its surface reflects the sun and natural colours used over the façade resemble those of beach sands. By night the stadium glitters and can be seen even from large distances with light coming out through the largely perforated cladding. Geometrical decorative pattern represents local crafts, though the stadium was designed by foreign engineers, the global office Arup.