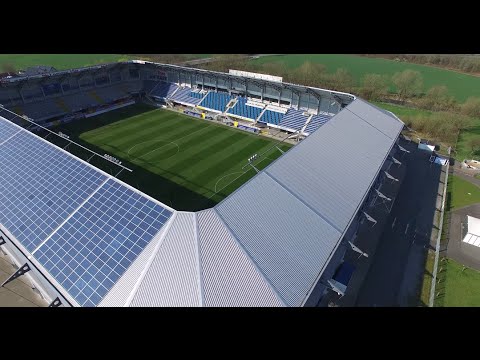 The need to build a new stadium in Paderborn became apparent in 2001, when the local club received a conditional licence to play at their previous stadium. First possible plots for the new venue were indicated in 2003 and the final decision was reached in 2004. Finally in July 2005 construction started. It was planned to last a stunning 6 months only, but after 4 months building permit was revoked after residents started protesting. Then came financing problems that even led to a complaint being made in Brussels over unlawful public aid. Finally, works could restart in March 2008 and the ground was ready by June 30th.

There were two inauguration games. One unofficial – Paderborner SC vs Galatasaray (July 16th) and another official on July 20th, against Borussia Dortmund. First official international clash was the Germany U21 tie with Belarus in 2009. Due to extremely low costs and easy construction, Bremer AG used the same design on another stadium that was opened in 2011 in Polish Gliwice.