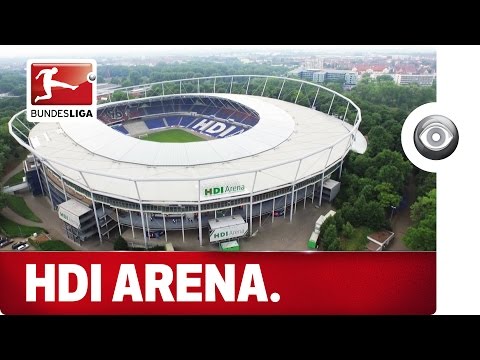 First large stadium in the Calenberger Neustadt was erected in 1954. Then called simply Niedersachsenstadion (this remains the most common name among local fanbase), the ground could hold up to 86,000 people on oval sloping terraces. With cover over the main grandstand and four slender floodlight masts (referred to as “toothbrushes”), it was among the most modern grounds in Germany then. No wonder a long list of large events were held here. Domestic games included games of Hannover 96 (since 1959) and other Hannover clubs, 4 league finals, 2 supercups, 8 domestic cup finals. Then came World Cup 1974 and Euro 1988. In 2002, decision was made to redevelop it completely. 75% of the old structure was dismantled with only parts of the west grandstand remaining. Pitch was moved towards that part of the stadium and new stands were built around it, this time without athletics track. Fully covered, without light masts. Construction ended ahead of schedule in December 2004 and first game of Hannover 96 was played already in January 2005. Apart from the club’s matches 2006 World Cup group stage was held here as well as 2008 Hannover Sevens rugby tournament. Also, this ground is among few that became places of mass funerals. In 2009 it was packed to capacity for the ceremony devoted to Robert Enke, H96 goalkeeper who committed suicide. Naming rights to the ground were bought by AWD in 2002 until 2007, but the contract was then renewed for another 5 years, until mid-2012.