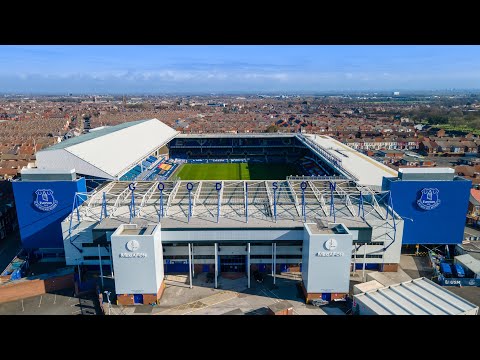 Decision to relocate to Goodison Road was made as future development at Anfield proved unviable. In 1892 a local contractor was ordered to erect three stands – two open terraces and one covered. Complete capacity was 11,000 (two with 4,000, 3,000 under cover). Implementing the plan took less than 6 months and Everton became the first club in England to have a purpose-built football ground (just several days after the world’s first – Celtic Park).

Until 1895 Toffees leased the venue and were only then able to buy it, providing redevelopments just several years later. New stands came in 1906 and 1909, both double-deckered. Two more double-tiered ones came in 1926 and 1938, making the ground have two levels on all sides. Three of those stands were designed by famous Archibald Leitch.

First game with floodlighting came in 1957 and since it was a derby clash against Liverpool, over 58,000 people attended it. Just a year later England’s first under-soil heating system was installed here with first scoreboard following in 1971. A major challenge came in the ‘post-Hillsborough era’ as three ends of the ground had terracing and needed conversion. On stand had just seats installed, another a lower tier redevelopment, while the last – southern, was simply demolished and rebuilt as a single-tiered end in 1994.

Over the years this ground has seen more top league games than any other with Everton spending just 4 seasons outside domestic top flight. To add to that, only 6 times the club hasn’t enjoyed average crowds that would put it in England’s top 10. Record average came in 1963 as each game was seen by more than 51,600 people. The stadium also had its share of international fixtures, to start with 1966 World Cup, during which it even hosted a semi-final.