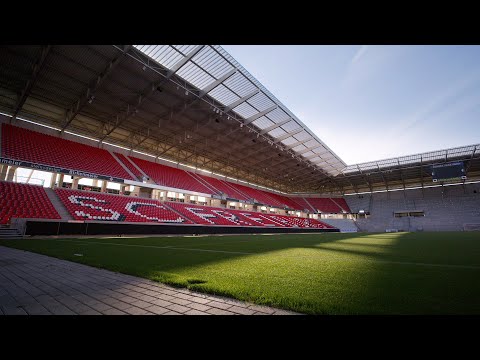 The stadium used by SC Freiburg up until now, the Dreisamstadion, which opened in 1954, no longer meets the requirements of a modern stadium. The new ground is situated in the Brühl district northwest of Freiburg.

A rectangular building is a real eye-catcher with its diagonal steel roof supports that carry roof weight to the outside. About 170 LED floodlights are built into the canopy, and the stadium is only 25 metres tall at its highest point, which was imposed by the airport’s proximity.

Inside, the ground impresses with its compactness, steep stands and a short distance to the playing field. The heart of the arena is the single-tier south stand, one of a kind because the rest of the stadium consists of two-tier structures. In addition, the largest solar power plant in the world was built on the rooftop to cover most of the energy demand on match day.