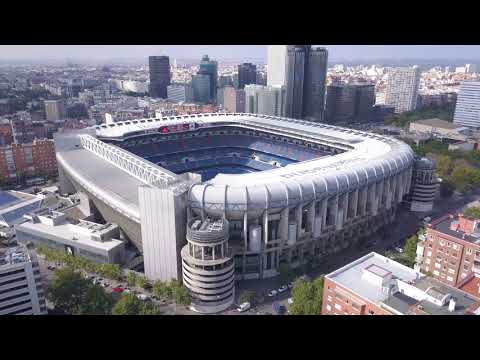 In June 1944 Real Madrid was granted credit to build a new ground next to its home at that time, Estadio Chamartín. In October works started and in three years time a new ground was already standing. It was a large leap for Real who have previously used a 22,000-stadium and now moved into a 75,000-people giant (app. 1/3 of capacity was seated). Even this proved insufficient, though, and in just 7 years the ground was expanded to an immense capacity of 125,000! In 1955 stadium received Santiago Bernabeu’s name. This famous player, secretary and finally president of Real was the one who brought the venue to life a decade earlier.

Real played their first game with floodlighting a few years later, in 1957, which ended major works for over two decades. Further changes came as Spain was hosting 1982 World Cup, for which capacity was decreased to 90,000 and part of the ground received cover. Overall improvements were done throughout the venue, mostly thanks to Madrid municipality that paid for some 70% of the works. This wasn’t the case in early 1990’s, as Real increased its debt to provide further changes, required by new safety regulations. Massive staircase towers were built in each corner and the ground grew again to get smaller a few years later, with all-seater rule being introduced. Last major revamps took place in 2001-06 when Bernabeu grew again, this time to exceed 80,000 seats.