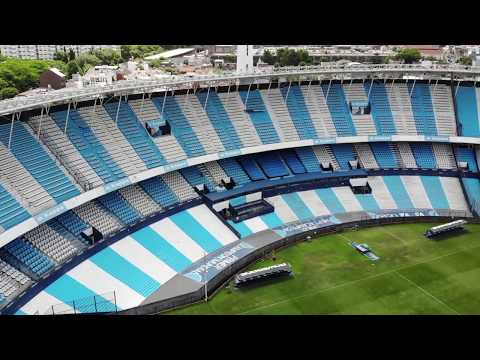 The goal was to build an exemplary 100,000-capacity stadium. Its double-tiered stands form an almost perfect circle, with parts cut out in the centre to make enough room for the field. To this day this shape, which earned it the “Cylinder” nickname, remains unique in the world of football. In 1966 an exhibition game against Bayern Munich inaugurated floodlight masts placed around the stadium, but as of today the western tower built back in 1950 remains the tallest part of the stadium with 60 meters.

Racing won several trophies at this ground, including the 1967 Copa Libertadores and Intercontinental Cup or the 1980 Supercopa Sudamericana. El Cilindro also hosted the opening and closing ceremonies of the 1951 Pan American games, just a year after the inauguration. Officially named after president Juan Domingo Perón, who contributed to its construction, the stadium went through major renovations in 1990s and early 2000s to meet modern standards. Between 1995 and 1997 it received a roof above the upper stands along with new floodlights. Later additional individual seats were installed and most fences removed.