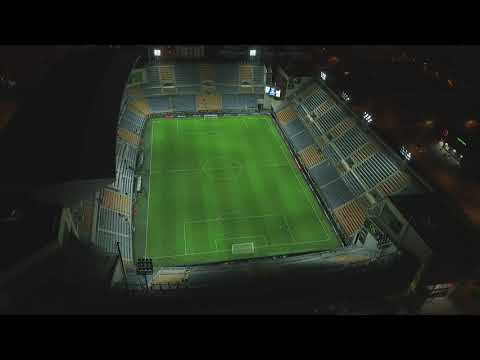 The original Ramón Carranza was built with an oval shape included a 400-metre athletics track between the pitch and the stands. The first rebuilding of the stadium took place in 1984, over the course of 4 months the main stand was demolished and rebuilt and the other stands were redesigned, at the same time the athletics track was removed and the pitch was moved closer to the stands. The rebuilt stadium included a roof over the main stand. The second rebuilding of the stadium took place between 2003 and 2012 when all four stands were demolished and rebuilt starting with the south stand (Fondo Sur) and the east stand (Preferente) between 2003 and 2005. Then the north stand (Fondo Norte) was rebuilt between 2006 and 2008. The last stand to be rebuilt was the main stand (Tribuna) which is the largest one with 8,281 seats and thus far the only one with a roof, the construction took place between 2009 and 2012. The new stadium a total built-up area of 94,938 square metres, it includes 31,555 m2 of underground parking for around 900 cars under the four stands, commercial areas located throughout the stadium totaling 23,349 m2, and 28,714 m2 are used for a hotel located in the main stand. The total cost of the rebuilding was €68 million, all paid for with public funds.