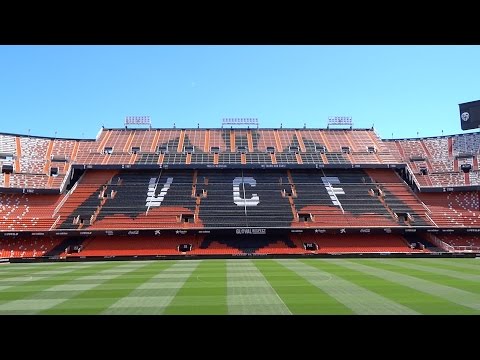 When it was built in 1923, this was Valencia’s second home ground. Back then the club was only of regional importance, but soon gained more power and already in 1927 the 17,000-capacity venue grew to 25,000. Unfortunately development seized a decade later due to Spanish Civil War that left the ground dilapidated after having been used as concentration facility and warehouse.

Mestalla became operational again in 1940 and seen Valencia’s first trophy, Copa del Rey, just a year later. Then came championships and expansion to over 45,000. Sadly, again stopped by destruction, this time after 1957 flooding. When reopening in 1959, the stadium had also new floodlights installed. In 1970’s terraces were slowly starting to make way to seated sections and the stadium was growing. As the plot was a modest one, it went upwards, ending up with some of the world’s steepest stands, partial reason of its fame.

In 1980 European Supercup game was held here, two years later World Cup games. And then in 1992 football part of the Barcelona Olympics. Apart from that several domestic cup finals, numerous top profile European games by Valencia and Spain as well. In 2013-2014 the stadium went through a major image change. All seats were replaced and the entire structure painted in orange-black-white club colours.