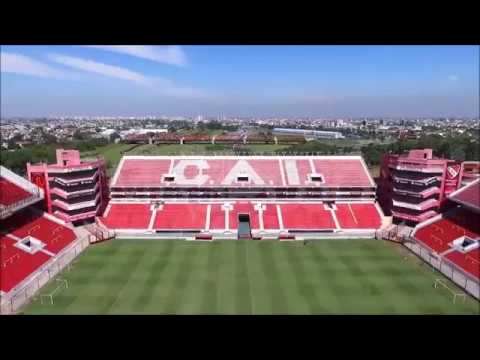 The old Estadio Libertadores de America was opened in 1928 as Argentina’s first to have reinforced concrete stands. Back then it wasn’t referred to as the Libertadores stadium, this name came only in 2005, long after Independiente had their record 7 Copa Libertadores titles. Designed by Independiente supporter Ezequiel Dorado, the building was first considered too expensive, then scaled down and eventually approved for construction.

Demolition of the old home began in late 2007, leaving only the double-tiered east stand temporarily for use. First three grandstands were substantially ready for opening in 2009, prompting demolition of the fourth. Each of the double-tiered stands is divided by “Garganta del Diablo” (Devil’s throat), large concrete pavilion placed in every corner. Every one of them offers 4 balconies for corporate clients and will become support for the roof when the stadium is fully delivered. Construction had to be phased to continue stadium’s use, but also to retain its economic feasibility.