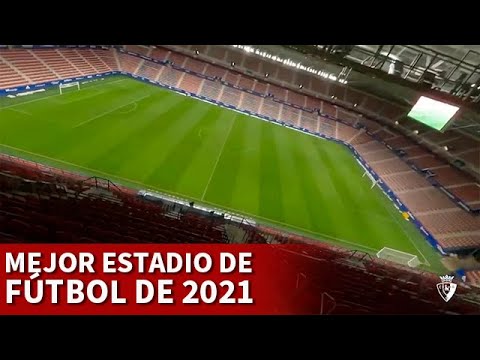 El Sadar was opened in 1967 and could then hold some 30,000 people. As time passed, though, this number was decreasing even despite adding another tier to the main stand in 1989. The cause is rather obvious – first bare concrete was replaced by benches and then by individual seats, all consuming initial space. In 2018, the Spanish club decided to completely rebuild it, as the stadium no longer complied with La Liga requirements.

The design of the stadium was chosen by the fans of Osasuna. This happened for the first time in the case of a professional football club. The “Muro Rojo” (red wall), by OFS Architects, was the winning design thanks to the voting of the socios. The colour identified with Osasuna is everywhere in the arena. The seats are red (except for the blue inscription “CA OSASUNA”), and the area where the teams meet before the kick-off is also painted red.

During matches played after sunset, this colour is also used to illuminate the outer facade. According to the design, three stands gained an extra tier and 14.4×6 metre screens were installed under the steel roof structure. In terms of size, the new displays are second in Spain behind only those installed at the Levante venue.