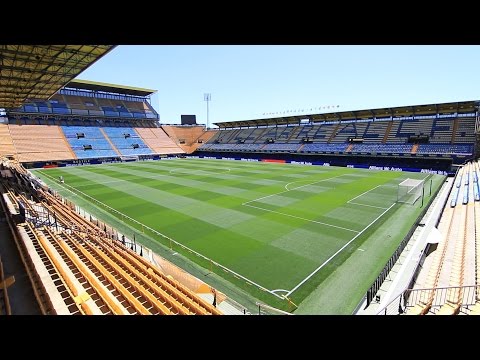 Villarreal is a city with such thick urban fabric and road network that it’s no wonder their main stadium also seems to be stuck between homes. Only the western facade is significantly exposed. It’s been a constrained site from the very beginning in 1923, when both the club and stadium were created. The name El Madrigal began officially functioning in 1925, previously the ground had been referred to as Campo del Villarreal.

In 1952 first major renovation began, seeing the field significantly expanded from 95x65m to almost the current standard (105x65m compared to standardised 105x68m). In 1972 the south stand was demolished and rebuilt only to be torn down and rebuilt again in 1988-1989 and then once more ahead of the 1999/00 season. At that last time also the northern main grandstand was redone. From 1973 the stadium has operating floodlights but perhaps most surprisingly its changing rooms have over the years been moved between three corners of the ground until they finally ended in the northern main grandstand, where they are today.

In the 21st century the stadium went through several other changes and one major expansion. In 2008-09 the east stand received and upper tier, currently used as the away enclosure. In 2017 the building was covered with yellow ceramic tiles in order to boost its identity and commercial value. Numerous ceramic manufacturers are displayed on the stadium in a unique naming deal.