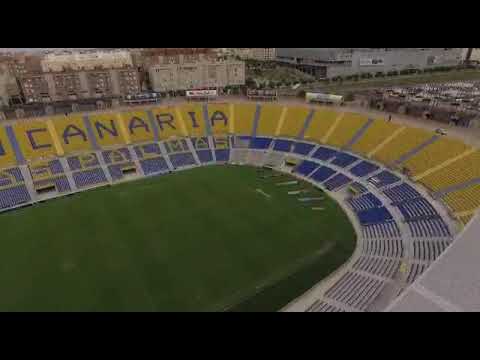 Until 2003 local side UD Las Palmas played at the famous Estadio Insular in strict centre of the city. But as the new venue was opened in May 2003 with an Anderlecht friendly, the side moved to southern hills. This time to play at an athletics venue, but running track may still be removed as the club have been planning for several years.

Though with capacity of just over 31,000 it’s hardly among Spain’s largest, it holds some records. In 2006 Las Palmas first witnessed a 30,120 crowd record in regular season (highest number for a Segunda División game) and then an overcrowded game in play-offs with some 35,000 people inside and 4,000 left out. Over 20,000 people attend regional derbies against Tenerife as well.

Apart from club games this stadium has also seen several fixtures of national teams of both Spain and Canaries. Motocross GP’s are organized regularly as well as concerts of top stars (Gloria Estefan, Shakira, Sting, etc.).