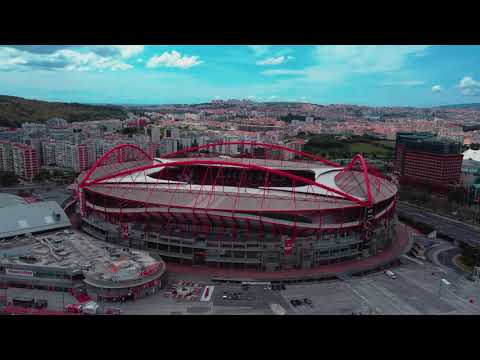 The original Estádio da Luz was established in the year 1954. When opened it had a capacity to hold 120,000 spectators, making the stadium largest in Europe and third largest in the world in terms of capacity. The new ground was built just adjacent to the former home of Benfica, right in time to host the Euro 2004 final. It also hosted two UEFA Champions finals and was elected the most beautiful stadium of Europe in 2014. Architect Damon Lavelle, from HOK Sport Venue Event (now Populous), designed the stadium to focus on light and transparency. Its polycarbonate roof allows the sunlight to penetrate the stadium in order to illuminate it. The roof, which is supported by tie-beams of four steel arches, seems to float on the underlying tribunes. The arches are 43 metres (141′) high and help define the look of the stadium, after having been shaped to be similar to the wavy profile of its three tiers. The venue is also famous for Benfica’s unusual mascot, an eagle that flies over the pitch before each fixture.