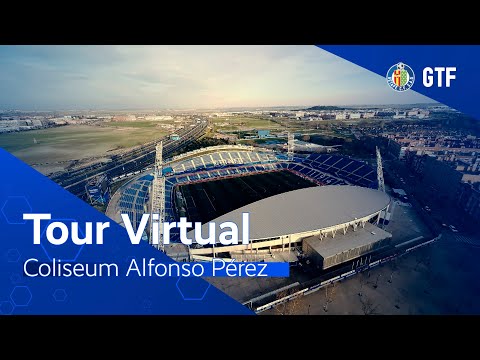 The name of the stadium is in honour of former Spanish international footballer Alfonso Pérez, who was born in Getafe but never played for the club.

It was built in 1998 and currently, after several extensions, it has a capacity of 17,393 people, with an average attendance of 10,579 (62.2%) in the 2009/10 season and 9,072 in the 2010/11 season. In the west stand a roof was installed, covering almost all of the stand in order to protect fans from inclement weather. In recent years the average attendance at the Coliseum barely exceeds 9,000 fans. Getafe CF has played in this stadium since 30 August 1998, when the team from the south of Madrid played their first game against Talavera CF, having left the provisional Estadio Juan de la Cierva where they played only one year, after the demolition of the mythical Estadio Municipal de Las Margaritas.

The stadium has also played several friendly matches between national football teams. In May 2010 the Women’s UEFA Champions League Final was held at the Coliseum.