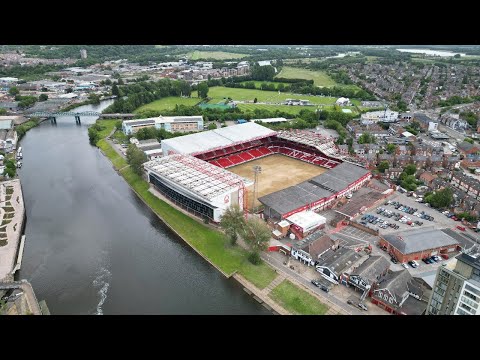 Nottingham Forest Football Club is the oldest league football club in the world, and was founded in 1865, but didn’t move to the City Ground, its seventh home, until 33 years later in 1898 The city wasn’t – it received its charter just a year earlier, which obviously called for a celebration. That is why the ground’s name from the beginning was City Ground. And though it did lie within city limits, it wasn’t owned by Nottingham. Major revamps came in the 1960’s. First in 1965 new main stand was erected, but sadly existed for only 3 years. On August 24th 1968 a fire broke out at half time of the Forest – Leeds United fixture. Though there were over 30,000 people in attendance, thankfully there were no casualties. In 1967 new east stand was erected and the first game saw the highest attendance to date, with 49,946 watching Forest beat Manchester United. Other significant changes came with the new executive stand in 1980 and redevelopment of 1992-93, when the ground was being prepared for Euro 1996. But there were more big events than just this tournament. City Ground also hosted Heineken Cup’s semifinal, several FA Cup Finals (female) and concerts.