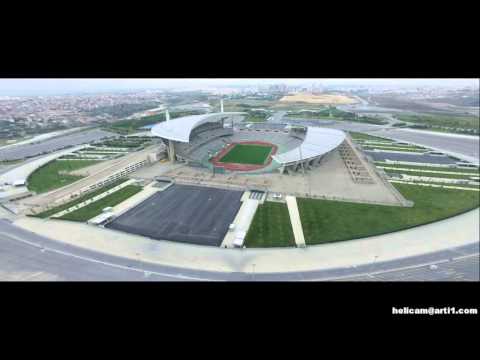 The stadium was cost-effective thanks to entire lower tier being sunken into the ground, only seeing west and east stands rise up. Partial cover (48,500 seats covered) is particularly distinctive in the west part, where the vast roof is supported by two pylons. It’s important in terms of symbolism as a cross-section of the roof resembles the bridges over Bosporus, while an aerial view shows the crescent shape of the roof, a key symbol for both Turkey and Islam overall.

Apart from being the home of national football team, the stadium serves as backup ground for major Istanbul teams. Galatasaray played here in 2003-2004, Besiktas also used it when their stadium was under reconstruction, while a rather obscure municipal club IBB played host from 2007 until their own stadium was built in 2014. Domestic finals and exhibition derbies were also held here. The Champions League 2020 final was supposed to be played in this stadium.